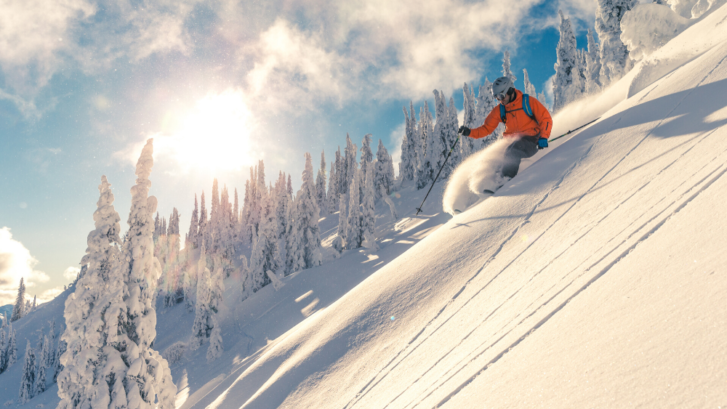 For Californians, winter sports can be somewhat of an enigma. There are many different kinds of winter sports that vary in the length of their existence; however, no winter sport has quite the staying power as skiing does. Skiing can be dated back about 5000 years, and although skis were originally used primarily for hunting instead of sport, the equipment evolved into something that, by 1865, was used in the first skiing competition. Norway’s preliminary skiing competition saw the start of a new era, and by 1936, skiing was a full-fledged Olympic sport.

Snowboarding, however, was not introduced until the mid-1960s, when a man named Sherman Poppen invented something called a “Snurfer”. This design would soon lead to the invention of the contemporary snowboard. Originally a surfer, Poppen wanted to bring the same rush from riding a wave to higher altitudes. In the 80s, snowboarding was still not allowed at ski resorts, which led snowboarders to hike up the slopes after dark. This changed in the mid-1990s when boots and bindings were standardized, and as a result, snowboarding became the fastest growing winter sport on the planet, with more than six million people participating.

The 2016, the International Report on Snow and Mountain Tourism revealed that there are over 125 million skiers and snowboarders in the world today. There are also 66 countries with lifts and snowy areas that serve both skiers and snowboarders alike. With that many people participating and that many operating locations, it is not beyond the realm of possibility that a lot of injuries are seen as a result of these sports. Below are three of the most common injuries you will come across when you hit the snow.

The vast majority of knee/ACL injuries on the slopes happen to skiers, although snowboarders are not immune to these. However, there is much more twisting and turning while on skis. The ACL/PCL (anterior and posterior cruciate ligament) is what stabilizes the knee, and when that part of the leg is twisted along with the foot being planted, an ACL injury can happen. This is commonly seen when a skier falls and their boot bindings don’t release. This can lead to the lower leg turning while the upper part of the leg stays in place. Ouch! The best ways to avoid these kinds of knee injuries is to be sure to keep your arms forward, feet together, and remember to never straighten your legs during a fall. Some of the doctors at Healthpointe that specialize in this are Dr. Stanley G. Katz, Dr. Leslie H. Kim, Dr. Hailey H. Dizay, and Dr. Anto T. A. Fritz among others.

Snowboarders are more likely to come across wrist fractures, although skiers are also prone to experiencing this injury as well. When falling and catching yourself with your hands, pressure on your wrists can sometimes be too much for the joints or bones. This can cause anything from a break, a fracture, ligaments being torn, or even a sprain. The best course of action is to wear a wrist guard (in addition to a helmet, these are a must). Also, keeping your hand in a fist so there is less pressure exerted on the wrist joint will decrease the risk. Skiers usually have an easier time with this, as they generally hold poles. At Healthpointe, we have several doctors who specialize in hand and wrist injuries, including Dr. Edwin Ashley and Dr. David Jeffrey Weil.

Regardless of whether or not you prefer to ski or snowboard, most injuries that occur in these winter sports are to the upper extremities. Dislocating the shoulder happens to be a relatively common injury for winter sports athletes. This tends to be very painful, and needs to be looked at by a physician as soon as possible. Dislocations often occur during a fall when the arm is outstretched in an attempt to stop the skier or snowboarder from hitting the ground. This can jam the arm back and up, dislocating the shoulder. This needs to be reduced, or put back into its socket, as soon as possible.

There are two main ways you can help prevent shoulder injuries. First, it’s a good idea to improve shoulder position awareness and muscle control by regularly performing rotator cuff and scapular muscle strengthening exercises. Second, limit the time that is spent in a vulnerable shoulder position. This means keeping your arms near you, instead of raised and away from your body. We have doctors who specialize in this field as well — Dr. Stanley G. Katz, Dr. Leslie H. Kim, Dr. Hailey H. Dizay, and Dr. Anto T. A. Fritz among others.

It is very important to have proper equipment while on the slopes. Regardless of whether you ski or snowboard, a helmet is an absolute must. Helmets will lessen the severity of possible head trauma if a fall happens. Additionally, it can block the sun from your eyes, and will keep your head warm. Another necessary aspect of these winter sports is the bindings you choose. Ski and snowboard bindings are the direct connection to the skis and the snowboard. If you can’t transfer your movements to your equipment, you aren’t about to have a good time. So, here are two guides that will help you with the process of picking ski bindings or snowboarding bindings. Finally, ski boots and snowboarding boots are extremely important. While there are a lot more choice for snowboarding boots than ski boots (all ski boots are hard, whereas snowboarding boots come in both soft and hard options), you still want to take into account how often you’re on the slopes, along with your foot size and width. Making sure to adjust them properly (not too tight or too loose) will help you maintain comfort while skiing or snowboarding.

If you have ever had any kind of injury related to winter sports, you know that it can be extremely painful. You also may be wondering what you can do once you have been injured in a skiing or snowboarding accident. Healthpointe Medical Clinics are all across Southern California, and our Colton clinic is only an hour away from Mountain High, one of California’s premier skiing resorts. Our team of doctors will work with you to not only manage the pain you are feeling, but also get you back to being your best self.

If you’ve hurt yourself on the slopes and are still experiencing residual pain, please visit us at www.healthpointe.net or give us a call at (888) 824-5580 to schedule an appointment today.